Driving a powerful car was like making love to a beautiful woman, mused Bond

Bond was glad to put the city behind him. He gunned the willing throttle of the DB9 Coupe and heard the satisfying growl of the twin tailpipes, as the powerful six litre engine sprang to life. Less than 30 minutes later, he was driving fast through the English countryside, as the Autumn sunset flooded the darkening sky with vivid colours. As he made a racing change and swung the car through an S bend, he felt a soft, but urgent vibration through the fabric of his Sea Island Cotton shirt. What now?

He pulled the gun-metal grey Aston Martin over into a lay-by and reached into his pocket for the latest gadget from Q Branch – an iPhone (“Do take care of this one, 007” Q had warned). He glanced at the device’s screen and smiled to himself. It was an Outlook calendar reminder for his hotel reservation and dinner that evening. Good old Moneypenny – trust her to think of everything.

Bond took a moment to check his Twitter account. ‘Secret missile launch’ was trending again – this situation was looking much worse than M had suggested. He opened the glove compartment and took out a can of Red Bull – his second that evening – to help him face the long night ahead. In the good old days, he would have popped a Benzedrine tablet and washed it down with Champagne. How times had changed, reflected Bond. 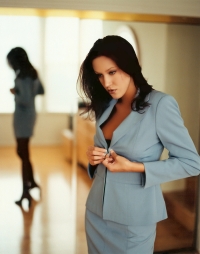 "Do you have Wi-Fi?" Bond asked the girl

He pressed on and soon arrived at the floodlit, 11th century castle, now one of Britain’s most striking and luxurious hotels.

The pretty receptionist greeted him with a welcoming smile. Her honey-sweet voice broke in on his thoughts, “Your name, please sir?”

“Bond. James Bond. Oh, and can I have Wi-Fi in the room please?”

“Of course, Mr Bond” said the obliging girl, who, according to her name badge, was called Cheryl. Bond made a mental note to check her out on Facebook later.

As he kicked shut the door to his suite, Bond slung his Aspinal ‘Grand Tourer’ holdall onto the king-sized bed. He switched on his Onyx Dell Adamo laptop and followed the hotel’s simple Wi-Fi connection instructions. After nine attempts and two calls to reception, he was finally connected to the Internet.

As he surfed, Bond opened his engraved, solid silver Dunhill cigarette case and took out a Nicorette Gum tablet, his 50th that day. His first task was to check TweetDeck. His friend and colleague, @008, had Tweeted greetings from #Jamaica and, for a moment, Bond’s mind drifted to the sun-kissed white sand of that faraway island.

Bond then spent some time searching LinkedIn and what he found next made his blood run cold. A new Group had been set up for people interested in world domination, under the name of SPECTRE. SPECTRE? That could mean only one thing. Bond’s archenemy and evil genius Ernst Stavro Blofeld must have discovered the power of social media! Bond followed one of the links to You Tube and clicked ‘play’.

“On Friday at noon, giant secret missiles will be fired at all of Europe’s capital cities” said a chilling, faceless voice. But there could be no mistaking the identity of its sinister owner. As Bond watched the gloved hand slowly stroking the impassive White Persian cat, his face set into a mask of grim determination. This maniac had to be stopped and it was up to Bond to stop him.

Where would this social media revolution end? It really was going to be a long night, thought Bond, as he updated his Facebook status.

Hello World - I am Louise Hudson, mum, wife and Social Media Manager. Following a media sales career in London I found myself settling on the borders of Leicestershire and Lincolnshire and doing all those grown-up things like starting a business and family. My passion is making a difference to businesses by engaging their customers
View all posts by Louise Hudson →
This entry was posted in communication, facebook, Internet, James Bond, linked in, Social Media, social media manager, social networks, twitter, you tube and tagged 007, communication, facebook, humour, internet, iphone, james bond, linkedin, social media, social media manager, social network, twitter, web marketing, you tube. Bookmark the permalink.

2 Responses to James Bond 007 and the social media revolution